Three local AFL Canberra clubs are throwing their support behind the 2018 Toyota Sir Doug Nicholls Round this weekend, wearing specially designed Indigenous Guernseys and holding ceremonies to celebrate the contribution and legacy of past and present Indigenous players to our game.

The 2018  celebrations will acknowledge, the ACT’s first public holiday (Monday 28/5) honouring the anniversary of the 1967 Referendum on May 28. The ACT is the first jurisdiction to declare the day a public holiday.

The Tuggeranong Hawks will continue their tradition as the first senior AFL Canberra team to don an indigenous Guernsey, with the Queanbeyan Tigers following suit with their clash against the Belconnen Magpies on Sunday. Marist College will wear their 2017 Guernsey in the Rising Stars competition.

This year the Queanbeyan Tigers Football club have announced their first Indigenous Guernsey and participation in the AFLs Sir Doug Nicholls Round as a recognition of our countries first people.

This week they have undertaken cultural awareness training themed around educating their player group on the culture and family aspects of Aboriginal and Torres Strait Islander peoples.

Their 2018 Indigenous Guernsey has been designed by Patrick Chapman and will be worn by Women’s and Men’s First Grade Teams during their clash against Belconnen Magpies on Sunday at Allinsure Oval.

The Tuggeranong Hawks 1st  Grade Men’s and Women’s teams  will  be wearing an Indigenous Guernsey in their Round 5 clash against Eastlake Demons at Greenway Oval. Their 2018 Indigenous Guernsey has again been designed by Senior Hawks player Thomas Hodge.

Hodge also acknowledged and thanks the many Indigenous players and families at the Tuggeranong Hawks for their assistance and contribution to the design.

“The design has a meeting place with the aboriginal flag in the middle representing the footy field where we meet to battle/play (Greenway Oval).”

“The coloured dots around the centre represent beginnings and heritage that are our three junior clubs (Bulldogs, Lions, Swans).  The black hands represent people joining together and the Boomerangs represent the enduring and ever returning culture of Indigenous people.”

Tuggeranong has had a strong history of Indigenous players at their club, with Ollie Kickett and Les Turner integral members of the club’s 1986 premiership side. Jay Kickett is also currently the senior games record holder as well as being a former senior captain, while Gerrit Wanganeen (President) holds the club games record.

The Hawks will also be holding a ceremony before their First Grade game with a smoking ceremony and welcome to country at approx. 1.45pm.

Marist Australian Football Club, who field teams in our ActewAGL Junior League and CareSuper Rising Stars, will sport their 2017 Indigenous Guernsey, designed by 2018 ACT Australian of the Year, Dion Devow, that will be worn by all their players in all grades this weekend.

We encourage everyone to get along to any of the above games and look forward to seeing you there.

To view all our fixtures, visit http://aflcanberra.com.au/fixtures-results/ 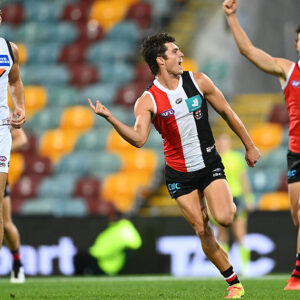